When does the digital form work together with the content? When does it enhance the experience and when does it dilute it?

It is debatable whether many of the web documentaries that are labeled interactive, are in fact interactive. You could argue that clicking on an icon to choose a videoclip is like pressing the play button on a VCR, and is that really interactivity? Most people wouldn’t think so, but some interaction researchers say that it is, because the medium responds to your actions. Other researchers argue that the notion of choosing isn’t enough to call something interactive; the choice has to have meaningful consequences for the outcome.

So to keep things simple let’s just call use the common term “non-linear documentaries” and focus on what is important: When does the digital form work together with the filmed content? For those who are not accustomed to thinking about non-linear structures, I have found this model useful.

The model is inspired by the work of French sociologist Roger Caillois and used in game studies. One end of the spectrum, represented by classic Lego bricks is a bit like YouTube: we play with them until we lose interest. It has an open form with no specific end goal; curiosity to explore is the driving force. At the other end we have structured games like Chess with rules, a fixed beginning and an end condition. It is closer to a linear form, except there are different ways of getting to the end. Between the two poles there is a dynamic slope, a tightrope between structure and open form. I have talked to the creators of three successful non-linear documentaries about the process of finding a balance between form and content: David Dufresne, co- director of Prison Valley; Leanne Allison, co-director of Bear 71; and Jigar Mehta, co-creator of 18 Days in Egypt 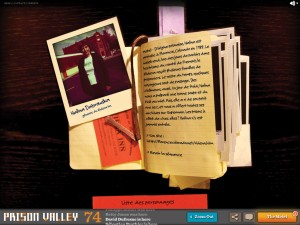 Prison Valley, 2010. Courtesy of David Dufresne and Philippe
Brault, a co-production of Arte France and Upian.com

Prison Valley is closer to the Chess end of the spectrum; the main story is linear. It’s a road movie investigating the prison industry in Fremont County, Colorado, better known as Prison Valley. Along the way viewers unlock extra video and photo material, and have the possibility to share their feelings and discuss the film’s topic live with others. David Dufresne’s background is in journalism and in the nineties he was an active blogger, so the internet was a familiar platform to him. The idea for Prison Valley started as a conversation between two friends: David himself and Philippe Brault, the co-director. Philippe showed David an article about Prison Valley and ideas started flowing about how this story could be told in a new way. ”It was in a Parisian restaurant. We drank a lot of wine and started to write some ideas on paper. We imagined a big game where you have to complete a mission”. At the beginning they had a conceptual idea of a gamified story. It started as a web-native story, and not a linear documentary to be adapted for the web. “Going on the internet was a choice. It’s not only a broadcasting system for us; it’s a new way to write a movie.”

It is interesting to mix our cultures from gaming, documentary and music. Sometimes I get more excited by finding a new form than by the subjects
David Dufresne

The restaurant scribbles evolved into more research and a field trip to the United States, and reality began to inspire and mingle with the conceptual idea. “Me and Philippe went to Canyon City in Colorado for 20 days to do some interviews. One morning I woke up in my motel room and said to Philippe: ‘We are going to shape the project like the town’. To me, as an European, it is very impressive to see a town in North America, where there is one main street crossed by smaller streets. I told Philippe: ‘Main Street is our movie and the other streets that cross are going to be the interactive part’. The motel room in the film was my real room, room number 12. Each sound you hear came from the motel, everything is real. So reality impacted the structure.”

David and Philippe teamed up with producer Alexandre Brachet from the production company Upian, and what began as a conversation in a Parisian restaurant became real.
“I think it is interesting to mix our cultures from gaming, from documentary, from music, and to try to find a new way to write and tell stories. To be honest sometimes I get more excited by finding a new form than by the subjects. That can be a danger.”

Bear 71, Leanne Allison and Jeremy Mendes, 2012. Courtesy of National Film Board of Canada

The form of Bear 71 is somewhere in the middle between structure and open form. It is a 20-minute experience guided by the voice of a bear, known as Bear 71, telling her story. The documentary has a fixed beginning, middle and end but in the remaining time the audience gets to explore the park freely though surveillance cameras. Leanne Allison, co-director, has a background in traditional documentaries. Her husband is a park warden in the Banff National Park in Canada where Bear 71 lived. “There are these cameras all over the park and we have always been fascinated by the imagery. It’s like nature uninterrupted, capturing these moments in time. There are virtually thousands of images, so I knew this wasn’t for a traditional film. We got to know some of these individual animals. We knew the story of Bear 71 quite well. Every set of cubs, every mate she had, where she travelled, her habits.”

Leanne got a development grant from the National Film Board of Canada and hooked up with Jeremy Mendes.

“He saw that these images look like surveillance. We realized that this was a way for people to relate to the bear, because she is being watched just like the rest of us are being watched in cities. We decided that Bear 71 would be this sort of omniscient character that knew about technology, but she was also a bear that had evolved a million years in nature and so she knew all of that too. And I knew that we could tell this story in a very different way”.

But there were times in the process where Leanne felt challenged by the emphasis on form: “It was all on paper and it was all conceptual. I thought these web cams and other stuff was going to inhibit the power of the story. We had a fair bit of conflict about that along the way, but I was totally proven wrong at the end.”

Even though Bear 71 is seen as one of the most novel forms of interactive documentary, it was only towards the very end that the team let go of the linearity: “Until the story was super solid, I don’t think anyone was willing to deviate from the linear structure. It didn’t happen until the final hour that we decided on that randomness. I didn’t actually see the whole thing put together until it was too late to change anything, so that really challenged me. When you are editing, you can see something and react to it. I couldn’t do that, I had to have faith.”

18 Days in Egypt takes the randomness one step further and is closer to the Lego end of the spectrum than the two previous examples. The experience doesn’t have a set time limit or a defined end goal. It is an ongoing participatory project about the Egyptian Revolution. Contributors upload their own stories for others to watch and discuss. The project was started by Jigar Mehta and co-creator Yasmin Elayat shortly after the 18 days in 2011 from the first protests to Mubarak’s resignation.

The initial idea was to make a traditional documentary which was to be compiled by means of citizen journalism from Egypt, but while the team was collecting material using social media channels the project took a turn. “We wanted to use footage from everyone out there to tell that story, but we ran into some really interesting challenges early on. People were contributing with finished pieces, remixing their own footage with other people’s footage, text and music. So instead of trying to fight that we decided to lean into it. If people want to tell these fragmented stories, then let’s try to help them tell those stories better.” So 18 Days in Egypt turned into a participatory project on the internet, curated by Jigar and Yasmin. “At the beginning it was a little hard to be honest, this idea of handing over the edit to the participants. It was good in the sense that it forced me to work more closely with the participants. ”

The project evolved organically online, and the form accordingly. The story is still ongoing, and recent events in Egypt only support the fact that it’s difficult to set an end but Jigar and his team are thinking about how to shape the project in the future. “Giving people some extra structure is going to be important. Now that we have all the clay and the clay is kind of lumpy, it’s our responsibility again to make a really nice pot out of it. To start shaping it in a way that is more appealing to a traditional audience.”_

Links to the interactive docs mentioned