The international pitching forum in Taiwan, CNEX, proved that there are many more Ai Weiweis in China. And in recognition of the solid stories and talent, the two best projects were also pitched at IDFA last year.

CNEX is a non-profit organisation that serves as a pitching forum, a training workshop, and a production company for Chinese projects and filmmakers. The forum takes place in Taipei, Taiwan, as far away from Chinese censorship as you get without actually leaving China.

There was a rare atmosphere at the pitching forum, where many of the central players in the financing and distribution industry were gathered (BBC, Al Jazeera, Gucci Tribeca Foundation, CAT and Docs, IDFA Forum, NHK, RTHK, to name but a few). They were all there to find original stories from China and support Chinese documentary filmmakers, for many of whom the trip to Taiwan was the first time they had been outside mainland China.

Also present was a representative for Chinese state TV, ironically called CCTV 9. And in the face of a long string of projects, that with different levels of subtlety criticised the Chinese Government, the commissioning editor had to continuously explain – to the giggles of the Chinese and Taiwanese audience – how despite his own personal interest in the story, he wouldn’t be able to support this particular project, or better yet, with the meticulous precision of a skilled politician, avoided answering at all.

When I asked Xiao-Qing Chen from CCTV 9 how he feels about dealing with the censorship, he says it doesn’t make him feel uncomfortable: “Everything has a background and history, no one can escape globalization, but with our background it’s good to be a bit more conservative.” And his attitude to the direction Chinese media is heading was clear. When asked if the strategy is a slow movement towards a complete lack of censorship, he replies: “It’s not a strategy, it’s the reality.”

As for the constant giggling at his responses his only comment was: “It’s an expression of Chinese smartness: we laugh about the elephant in the room, but we don’t mention it.”

First and foremost CNEX offers a place free of Chinese censorship, where the Chinese filmmakers can pitch their projects to foreign financiers. The result is documentaries engaged with issues of human rights, democracy, sustainability and social issues, and no one feels the need to venture outside China to tell their stories. There is already more than enough to dive into on the mainland.

Two projects in particular stood out and both were later accepted for the IDFA Forum: The Road by Zhang Zan-Bo, about the construction of a highway straight through a small village in the Hunan Province. The result is a clash between villagers, workers, the construction company, the past and the future. The story deals with the human consequences of a society moving forward at a ruthless speed. Another project that caught the collective attention of the financers was My Home was my Castle by Jianxin Wu. On the surface the story is similar to stories we’ve seen addressed in documentaries many times before, it’s about the demolition and forced removal of Chinese citizens. But Wu has an approach that lifts the project above the issues of demolition to the realm of something entirely fundamental, namely the crossroads at which China and its citizens now find themselves.

Wu has a background in law, so he has a thorough understanding of the legal battles his main characters are fighting. They live in an area facing demolition and with the slogan: “We arm ourselves with law and thus help the government to correct its wrongs,” they are fighting for their legal right to keep their homes. But beneath this David and Goliath story lies the story of the inner battle played out in the general Chinese population: the battle, Wu refers to as a battle between an identity as an “ant-zen” versus an identity as a citizen. He elaborates:

“Ant-zen means that you are ant people, and anyone can crush you. The concept originates from the time when immigrants came into the cities and lived underground in tiny rooms, and during the day they came pouring out from underground. An ant-zen feels powerless in the face of government and thus doesn’t exercise his rights as a citizen.” But, as the characters in My House was my Castle exemplify, there is a fragile, emerging sense of citizenship in China. This sense is intimately tied to the law and the use of the law as a way to protect your rights.

Wu explains: “The emerging awareness of rights as a citizen stems from social inequality. When you are weak, you have no support, you are pressed down. But some people bounce back; and there are three things that can help you: one is connections, second is power or money, and third is the law. And from here stems a sense of citizenship…”

But the people fighting to keep their homes in My Home was my Castle haven’t yet completely developed a sense of whether they’re fighting for their rights/justice or for as much compensation as possible, and this is where the frailty of the emerging citizenship lies. And this is how Wu perceives the crossroads China is at now: “The sense of exercising of your legal rights has just begun in these people, who call themselves ants, and there is a risk this sense can be corrupted. The mind-set is still that of an ant.”

Another complication of the assertion of legal rights in China is that legislative, judicial, and executive powers are not separated. When I met the team again at the IDFA Forum, producer Chaowei Chang from the CNEX foundation further elaborated on the background of Chinese law and the growing desire for citizenship: “The new General Secretary Xi Jinping said ‘We should have a Chinese Dream’, and then everybody in China tried to interpret what this dream could be. A famous liberal paper, Southern Weekend, said that the dream should be the dream of a reformed constitution. The Government intervened and tried to get rid of the article, and the party rejected the idea of a new constitution. They insisted that the party is the only way for China. The message from the party press was that the idea of a constitution is Western pollution, article 1 of the present constitution says: the Communist Party is the only legal party.”

And Wu adds: “The process of awareness of civil rights started in Europe 2-300 years ago, and it’s only 30 years ago that the implementation of modern law systems began in China. There hasn’t been any religion in China for more than a hundred years, and thus no abstract concept in front of which we are all equal. There is a Chinese saying that goes: ‘The punishment of law doesn’t apply to high rank officials’; it’s a core concept of ancient China and still very influential.”

My House was my Castle is produced by CNEX and was pitched at the IDFA Forum round table. At the presentation the producer Chaowei Chang underlined: “There are more Ai Weiweis in China.” Both Chang and Wu emphasise that the hope of China doesn’t lie in changing a top-down process but in a bottom-up one.

The strong projects presented at CNEX and especially The Road and My House was my Castle, which were both also pitched at the IDFA Forum, leave no doubt that there is a growing number of determined Chinese filmmakers from very varied backgrounds with strong stories to share and a chance to get them financed internationally. But to Wu and many of his colleagues, the most important thing is for these stories to be shown in China.

There is little chance this will happen in the near future, but as Ruby Chen, COO, CNEX, explains: “Many Chinese films travel in China but are screened in cafés and small spaces. There is quite an extensive scene for underground screenings.”

The battle between ant-zenship and citizenship is on. _ 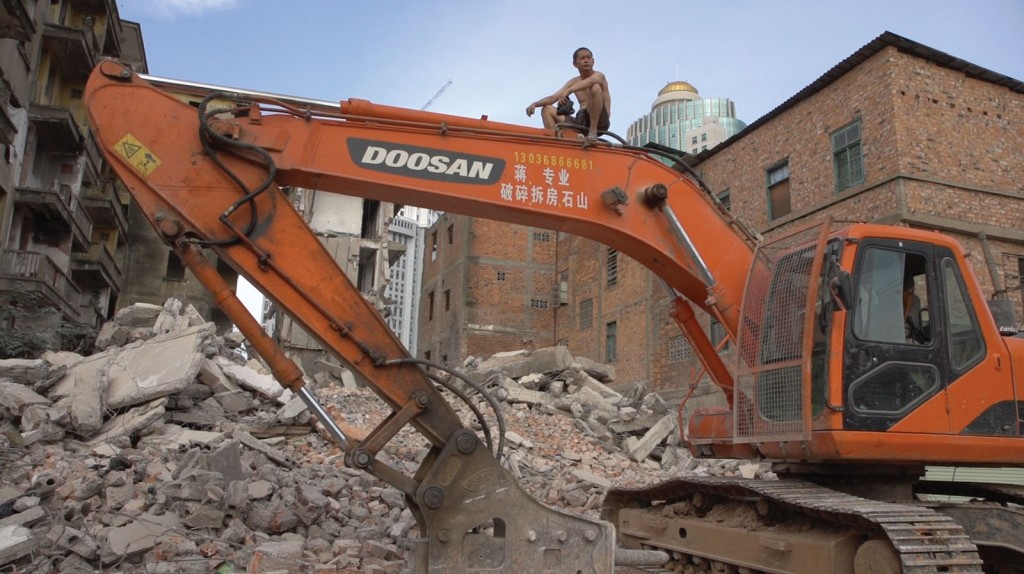 0
DominicDennis September 22, 2014
No Comments Yet