In the second of a series of articles on sound design in documentaries, Peter Albrechtsen – a sound designer himself – focuses on the visionary sound design of the documentary classic, Tarnation, 2003. The film’s sound designer discusses the process behind the extraordinary subjective soundscapes in the acclaimed and extremely personal debut by Jonathan Caouette.

Archive footage has been an integrated part of documentary filmmaking from the very beginning and is usually always accompanied by the actual sound of the chosen clip or simply a piece of music. It’s one of the most classic sonic concepts in documentaries – the sound of the past is quite often rather anonymous and straightforward.

But what does archive footage of the mind sound like? What does it sound like when the sound of the past is experienced through a person’s imagination? That’s what happens in the 10 year old documentary classic, Tarnation. The American filmmaker Jonathan Caouette tells the story of growing up with his schizophrenic mother in a mixture of snapshots, Super-8 footage, answering machine tapes, video diaries, early short films, clippings, new video clips, recent interviews and more – culled from 20 years of his life and hundreds of hours of footage.

All this makes for a visually arresting movie – a bombardment of images – and the sound gives the images added depth and dimensions and evokes deep emotions. Lora Hirschberg, the film’s sound designer and mixer, remembers that Caouette “was most interested in making the soundtrack feel like the visuals, he loves music and music montage and we just went with how the picture image made us feel – uncomfortable or dreamy or confused or choppy, whatever worked.”

Lora Hirschberg is one of the most prolific sound people in the US. Attending NYU film school, she gravitated towards sound post-production to fuse her love of music (she is a musician and accordion enthusiast) with storytelling and creative collaboration. Working out of Skywalker Sound in California, Hirschberg’s 20 years of credits consist of both documentary and narrative films, including Into the Wild (2007), The Dark Knight (2008), The Avengers (2012) and Inception (2010) for which she became the first woman to win an Oscar for Best Sound Mixing. But she has also worked on a long list of documentaries, one of the most recent being the 2012 Oscar-nominated How to Survive a Plague

“I have always been a devout fan of documentary ﬁlm and we have an incredible doc community in the San Francisco Bay Area, so when I moved here in 1989 I met many of them and have worked with several – Rob Epstein, Jeffrey Friedman, Lourdes Portillo, Debra Chasnoff. I love Werner Herzog and Errol Morris and Frederick Wiseman. I really liked Lauren Greenﬁeld’s Queen of Versailles last year and How to Survive a Plague. And this year’s Stories We Tell by Sarah Polley is awesome.”

Tarnation is famous for having been made for $218 on a Macintosh and edited with the free iMovie software that came with the computer. But of course hundreds of thousands were later spent to clear music rights, improve the soundtrack and make a theatrical print (which was invited to play at Cannes Film Festival Directors’ Fortnight). And this is when Lora became part of the picture – “I was connected to the project by a friend of John Cameron Mitchell who was one of the executive producers on the movie.

“Our task was to elaborate and make it a proper theatrical experience from the Avid mix. I think we cut for two weeks and then mixed for one week,” says Lora of the very tight process that nevertheless ended with extremely impressive results. It’s an immensely creative soundtrack, manipulating a lot of the original sound material in extremely creative ways. “Jonathan was new to this level of technology, so he was very happy to have our take it on. He was with us during the whole mix I think.”

On first viewing the music will be the sonic element that people really remember. The soundtrack contains a bit of score but mostly uses songs by a wide variety of artists, including Lisa Germano, The Cocteau Twins, Dolly Parton, Low, Glenn Campbell, Marianne Faithfull and many more. It’s almost like a musical montage and Lora’s sounds accompany the music in both beautiful and brutal ways, depending on mood and atmosphere. Her musical background is very evident throughout but she also highlights the importance of the music being a part of the film from the very beginning of the sound editing – “Jonathan cut all the music and also had a composer work on the ﬁlm. It was a really great amalgam of styles and genres. We had all the music for the ﬁnal mix when I came on the project.” 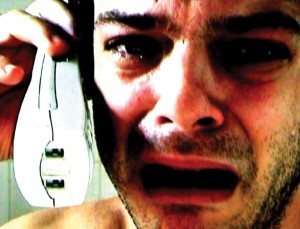 One of the amazing aspects of Tarnation’s sound design is the use of noise and noisy textures which is an integrated part of its extraordinary impact. Noise is often an integral part of documentary soundtracks just because reality is noisy, but in Tarnation noise is not just something that happened during the shoot – it’s used in almost impressionistic ways. Of course, the use of noise as sound design had previously been demonstrated by avant-garde directors like Kenneth Anger and Stan Brakhage, but in Tarnation it reached a new audience worldwide. It felt frighteningly alien and fascinating at the same time.

“In a way, we were trying to protect any sound that had a quality that elicited a response – so if it was noisy and distorted but made you have to listen harder or feel uncomfortable then it was working for the movie and we honoured it. Part of my job is to be the audience and try to be true to my own ﬁrst impressions when watching something and resist the urge to change things that were really impressive on ﬁrst viewing just because the ﬁlm makers or me are getting used to something. So the challenge is to not mess it up if it is working! So much of what is harrowing in there is that sound quality of the old recordings, all the distortion and noise, it just makes it so much more tangible and wrenching, I think. We did lots of manipulations but no new recordings.”

Tarnation also uses an extraordinary amount of on-screen titles: printed words substitute for the traditional voice-over. People watching Tarnation will probably do more reading than for any other English-language film in years. In a TV documentary such texts would have been supported by whooshes and slam-bang sound effects but in Tarnation Hirschberg approached it in a much more subtle way:

“The text is quiet except you hear lots of other stuff layered on it – voice recordings, some sound design punctuations. I love that text stuff because it is that pure “necessity is the mother of invention” thing where Jonathan solved a storytelling problem with the tools at his disposal and came up with something so elegant and powerful.”

Elegant and powerful is a pretty accurate description of Tarnation, all in all. The movie is part poem, part jukebox, part fever dream. Caouette himself has likened it to a rock opera and that’s not a bad description either. Rounding off our talk, Lora has a bit of sound advice for documentary filmmakers:

“Sound is a great storytelling tool and a great emotional tool, so try always to think about its purpose in a scene and how it can help you and how it is hurting you. A documentary is a theatrical experience, even when it is purporting to be nonﬁction it is still manipulating and “tricking” the audience into its point of view. Tarnation is a pure expression of that ability for me because there is no story per se, but by the end you feel you have lived this guy’s story and all because he got you to see and hear it through his eyes and ears.”_