In the wake of Michael Moore’s work, the emerging trend of documentaries has achieved an unprecedented degree of success among militant cinema-goers. His 2004 hit Fahrenheit 9/11 was indeed considered to be the highest-grossing documentary of all time as he shook the world making fun of George W. Bush, then President of the United States. Others regard Al Gore, Vice President of the USA between 1993 and 2001 as the one who cleared the way for ecological documentary as a viable film form. With An inconvenient Truth, directed by Davis Guggenheim (2006, United States), we saw the emergence of a new kind of cinematic object. Documentary about the ecological crisis and civilisational malaise was raising awareness in the micro-market of eco- cinemaand crystallizing the debate around a mediatised figure rather than around an identified filmmaker. Produced and distributed with significant resources, this kind of documentary seemed to promise massive success.

In fact, the films devoted to ecological issues have invaded the cinema screens especially between 2006 and 2010. As French theatres registered the highest rate of attendance ever reached in 27 years in 2009 (with 200.85 million entries4), it seemed an interesting context to ask ourselves to what extent the press and spectators agree that eco-cinema is being inscribed in the public space. 2009 was also a memorable year when it came to French productions.

Our research undertaken at La Sorbonne University (Paris IV) showed that both press  and spectators  saw eco-cinema as inscribed in the public space through shared information. This was emphasized by the kind of films audiences talk about when it comes to eco-cinema. As a first step to unravel shared information, we took a look at a selection of press articles on the issue. Keywords cinema, film, documentary, environmental, ecology, ecological, ecologist and green (in French) were among a group of headlines of the French Press. Our wide sample ranged from magazines like Marie Claire to newspapers like La Croix; both left wing (Les Inrockuptibles) and right-wing (VSD) editorial lines are represented. The sample included both generalist press (La Croix) and more specialized ones (Livres Hebdo), both national (VSD) and regional press (Le Progrès). Within these titles there is also diversity in periodicity: daily (Le Progrès, La Croix), weekly (Les Inrockuptibles, Livres Hebdo and VSD) and monthly (Marie Claire). Moreover the broadcasting/circulation varies from 10.000 copies per week (Livres Hebdo) to 207.849 papers per day (Le Progrès). It was among this group that the terminology adopted by the press to define ecological cinemaemerged: greenbuster, green cinema, green wave, eco-doc or eco-film

The Green New Wave of Cinema

The next step was to find out what films the press covered. A close reading of the diverse French publications allowed us to understand how the press inscribes ecological cinema in the public space. In the articles in question,  several documentary titles came up as representative of ecological cinema(see figure below). Although it wasn’t possible to determine their profile (like, say, “ecologists”, “non-ecologists”, “more or less informed about ecology”) the viewers often identified themselves with one of those general categories.

How is the ‘ecological cinema’ inscribed on the public sphere? 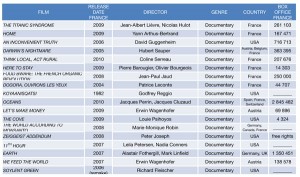 Criteria : films most mentionned by press and spectators. Data regarding the documentaries is available on Allo.Ciné and Commeaucinéma. Sources: For the press: selection based on the articles presented on the figure The Green New Wave of Cinema; For the spectators: comments left (mainly between October and December 2009) by a group of 205 spectators who subscribed to the French website AlloCiné and who declared having watched the French documentary The Titanic Syndrome.

Based on the figure, the first conclusion is that whenever the press or spectators talked about green cinema, environmental documentaries, ecological filmsor greenbusters in the public space, what they really referred to weredocumentaries. Among those, the productions released in 2009 mentioned most often are The Titanic Syndrome, and Home and Here to Stay. Despite the fact that an audience sometimes deemed they were tired of so-called “eco-cinema” due to the consecutive release of several eco-documentaries during 2009, it seems that the press and audiences easily recalled the films released during that specific period. Undoubtedly – though it is not part of the sample we observed – AnInconvenient Truth emerged as a significant contribution to the representation of ecological cinema. Let’s Make Money, The Cove released in 2009, or Oceansand Think Global, Act Rural released in 2010, registered far fewer mentions both in articles and other comments. Still, as opposed to fiction films,  the documentary is undoubtedly the film form most associated with eco-cinema: both French viewers and the press mention eleven documentaries, mostly French or North American, all dealing with the natural environment.

Additionally, the “star” documentaries of ecological cinema are unquestionably films that use  a male mediatised figure to embody the presentation of the subject of ecology. The movies talked about the most in terms of mentions in the press (56) or among spectators (20) are the ones featuring Nicolas Hulot (who lent his voice to the narration of The Titanic Syndrome), Yann Arthus-Bertrand for Home, and Al Gore for An Inconvenient Truth. Most viewers said that they believed that popular figures contribute to making a bigger part of the audience aware of the urgency of the situation of an ecological crisis. Others welcome any eco-documentary initiative, as much as they do mediatised figures, in the sense that they not only allow for the exhibition of ecological documentaries in cinemas or television, but also foster debates about ecology in the public space as shown in our next article about de-ghettoising the subject of ecology through the documentary.

» THE CAPACITY FOR SURPRISE