Marc Glassman, editor of POV, was part of Hot Docs at the beginning 20 years ago. In commemoration of the festivals 20.th anniversary he gives a historical perspective on the first half of the festival’s life.

Everybody loves a success story and there are few that can match that of Toronto’s – and latterly, the international documentary community’s – love affair with Hot Docs. Now celebrating its 20th anniversary, Hot Docs is second only to TIFF (Toronto International Film Festival) as the most popular cinema event in Canada. Further, like TIFF, Hot Docs can rightfully claim status as the leading film festival of its kind in North America; certainly both are in the upper echelon of events in the United States and Canada.

When Hot Docs was conceived in 1992 by Paul Jay, then chair of the Canadian Independent Film Caucus (now DOC, the Documentary Organization of Canada), it was not an easy idea to sell, even to his own board of fellow documentary filmmakers. In fact, the board voted down his motion to create a Canadian documentary festival 11 to 1. But the one, Mr. Jay, wasn’t dissuaded. “I was sure that a documentary festival would make us money,” recalls Jay. “Nothing could change my mind. I approached Debbie Nightingale (then the head of TIFF’s Trade Forum) and asked her if she’d be willing to work with me on it – for no money, until we could raise some.”

Nightingale saw the potential in Jay’s vision.
“Documentary and Canada are synonymous in my mind. Paul was the dreamer and I was the practical one, which made us a good team.” Nightingale, who now runs her own successful production company, was an expert on  logistics. She knew how to raise money, which meant her salary was eventually paid, but there was little money left to hire staff except for technical and administrative people for the festival itself. The overall budget for the first Hot Docs was $100,000; now it’s $6,265,000 (with $1 million being in-kind services).

Jay and Nightingale created a competitive festival for Canadian documentaries, to be capped off with a high profile awards dinner. That initial year was the  “purest,” according to Nightingale, because it was “a documentary festival for, by, and about documentary filmmakers.” Nightingale had successfully created committees across the country to vote on all competitive categories and handled the creation of a massive set of rules and regulations. 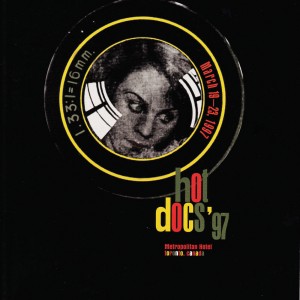 While Jay initially intended the festival as a money making exercise for the Caucus and its lobbying activities for independent documentary directors across Canada, he quickly realised that there could be a grander vision for the festival.

Take the name, Hot Docs, which was funny and revolutionary at the time.
“It was edgy,” recalls Jay. “We wanted something that wasn’t staid and dry and academic. It embodied the idea that docs could be vibrant, sexy and popular. You shouldn’t feel like you were taking medicine when you saw a documentary! Any well made doc is exciting because the filmmaking is excellent. Just like any other movie.”

It takes confidence to create a festival and Jay certainly had it – in spades. In order to attract media interest and international attention for Hot Docs, he invited British filmmaker Nick Broomfield, then one of the few documentarians whose features played commercially in cinemas, to premiere his latest film Aileen Wuornos: The Selling of a SerialKiller in Canada as the Opening Night event. It sold out and the buzz from that evening sizzled throughout that first festival, which took place in February, 1993.

A sense of drama always animated Jay, who has directed the award-winning documentary Hitman Hart: Wrestling with Shadows, produced a sensationally successful TV current events show counterSpin and is now the CEO and Senior Editor of The Real News, a radical Internet service. That sense of occasion was with him during the first Awards ceremony.

“The Toronto International Film Festival was already established,“ recalls Jay, of the period in the spring of 1992, when he began to work on Hot Docs. “Everyone said that another festival wouldn’t make any money. Early on, Debbie and I went to Kodak and requested $10,000 to do a feasibility study to find out if that was the case. We used $2000 to conduct the survey and write a report on it and $8000 to feed the festival. We never considered that the report would be negative. We were committed to creating the festival.

“A couple of months before the first festival, we got the report. I looked at the conclusion, didn’t tell anybody about it and put it on the shelf. At the totally successful first Hot Docs gala, in front of 600 people – the whole documentary community across the country including broadcasters and funders – I announced the results of the feasibility study. It said that the festival couldn’t be done!”

Hot Docs continued to build on its formula for the next four years. The committee system, which involved having filmmakers, broadcasters and critics vote on Canadian documentaries in a large number of technical and artistic categories worked well, driving up interest in the films in the months leading up to each festival. A select number of high profile international documentaries were screened every year. By the time Barbara Kopple came in 1998 to present the Canadian premiere of Wild Man Blues, her film on Woody Allen, Hot Docs had begun to attract the attention of the documentary industry internationally.

But by 1998, it was also clear that Hot Docs couldn’t continue as a division of the Canadian Independent Film Caucus. “I’m the one who engineered the split between Hot Docs and the Caucus,” says Jay. “The intent was never to decrease the Caucus’ profile in the festival. It was done to free up the Caucus to lobby broadcasters and the government [for benefits and opportunities] for documentary filmmakers without worrying whether the same organizations were giving money to Hot Docs or not. And it left Hot Docs to pursue its own path. Debbie and I left at the right time. But we had built a foundation by that point.”

1999 was the year that Chris McDonald took on the role of Executive Director. Debbie Nightingale stayed for a final year, as Festival Director, while Hot Docs began to transition into more of a global event. New programming initiatives included a curated International programme, a national survey (the first was France) and a retrospective of the films by a Lifetime Achievement recipient (in this case, Albert Maysles.)

Screenings were held in Toronto’s Little Italy, with cafes replacing hotel conference rooms as the festival’s smaller venues. The main public events took place at the now defunct Uptown Theatre and Little Italy’s Royal Cinema. 69 films screened to 7000 people that year; in 2013, 180,000 attendees saw 204 films. The festival had begun to change – but there was still a long way to go. _