Is there a link between me going to a festival and pouring rain? I start to think there is. Sheffield Doc/fest be warned, keep your umbrellas ready for next week I’ll be there.

But for now I’m here in Krakaw, guest of the Krakow Film Festival. Alas it’s a brief visit: only three days and they are filled with industry events and personal meetings, so l have little time to watch the documentaries. This is indeed a pity, for the programme looks promising. On the other hand, it’s nice to see the colleagues of Dokincubator and the Dragon Forum at work and more important, to be able to judge the result of their efforts.

Having arrived on Wednesday afternoon (yes, for those of you who are interested: without my luggage) I was kept awake until 2.00 a.m. by binge drinking British thugs in the street in front of my hotel and awoken at 5.30 a.m. by chanting Hare Krishna’s who wanted to share their joy with me about the fact that the sun did come up once again (something I could have predicted the day before, had they asked me..) and so I was quite tired when I went to the venue to listen to the participant’s pitches of DOCS TO GO. Would they be able to keep me awake? Oh yes, they did.

During this session the audience was introduced to upcoming Polish documentaries and take my word for it: it was a great experience. After almost 30 years in the trade it was nice to feel that I can still be surprized and amazed. Some people claim that all stories have been told by now, we’ll they haven’t.

The pitching session opened with the presentation of THE QUEEN OF SPADES (Agnieszka Zwiefka). In a very eloquent way the director took us to an environment that has been portraited in many, many documentaries: the world of the Roma people. Been there, done that, you think? Forget it: this is one of the most original tales I’ve seen in many years and I have no doubt that this documentary will be an international hit. I’m not going to spoil the fun by giving you the details of the story. Only this, if you liked Slumdog Millionaire then better reserve your ticket now.

Once again my prejudices were challenged and proven wrong with the project ETHIOPIQUES – REVOLT OF THE SOUL (Maciej Bochniak). This project brings us back to Ethiopia in the sixties and take my word for it: this will be a great trip. Although I’m old enough to have witnessed that period with my own eyes (although not in Ethiopia, true) this project was an eye- and ear opener. Why an ear opener? Well, watch the documentary soon and you find out. By the way: bring your dancing shoes.

Putting on your dancing shoes, that’s exactly what the stars of CZECH SWANN (Aleksandra Terpinska and Danuta Gegotek) are doing. I watched their pitch with tears in my eyes. At the beginning it were tears of laughter, because of the very funny first clip they showed, but then it became tears of emotion when I was overwhelmed by the beauty of it all. This might sound heavy but it isn’t. This documentary (described as a feel good movie by the makers themselves) takes us on an ride with some – eh, slighlty overweighed and not so young women – whose ambition it is to dance the Swann lake ballet. Are they going to make it? I don’t care, as long as I can stay with them when they try. Feeling depressed? Here’s the remedy. This documentary will also make your mind glide through the air, as if you were Margot Fonteyn yourself.

In a blog I can be personal and subjective, and therefore I think I’m free to say that the projects above were my favourites. But very close runners-up were THE LIFE OF A BUTTERFLY (Marta Golba), AGFA 1939 (Michal Wnuk and Madgalena Kaminska), a WOII -story that made the German professionals close to me sit upright and listen very carefully, the very intimate FOOTBALL BROTHERS (Marcin Filipowitz and Adam Siesicki) about two talented football-playing brothers who are confronted with the harsh choices in life, K2 PASSAGE (Eliza Kubarska and Monika Braid) and last but certainly not least a project that in the end might be the biggest surprise of all: BEFORE DAWN (Monical Paluczuk and Katarzyna Slesicka). This documentary is set during one night, a dark one, when people in need are looking for somebody to talk to and who listens to them. The clip that was shown was very convincing and moving. I’m really looking forward to this one too.

And now it’s time to throw myself on the street and walk through the rain to listen to the projects of the Dragon Forum. At least I’m in better shape, because I did discover that Hare Krishna’s do not get up at five to celebrate the rain. Thank Krishna for that. 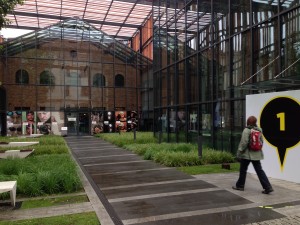 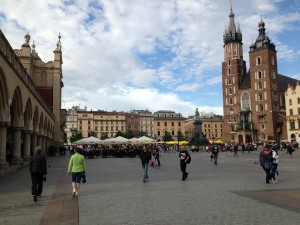 » THE CAPACITY FOR SURPRISE