Guzmán’s work centres around Chile and its political development from Allende’s Chile in the 70s to the Chile of today, and thus very much around issues of memory, history, traces of the past and collective consciousness. The Battle of Chile, Guzmán’s trilogy that depicts the election and subsequent coup d’état in Chile in 1973, was used as a starting point for a round-table seminar discussion about the current situation in Europe and in Greece in particular. But as Guzmán remarked from the Skype screen, it is very difficult to export a unique experience:
“Despite the relentless attacks and financial pressure from the US on Chile and its population, the time of Allende was a time of true solidarity among the people. It was an unforgettable adventure that only happens once in a lifetime, maybe only once in a century.”
This unique experience has left a mark on Guzmán’s career that can be seen in all his work.

The Battle of Chile depicts the events of ’73 as they unfold, but since then memory and the retracing of history has played a central part in Guzmán’s work. So far only about 40 percent of the human rights violation cases in the aftermath of the coup d’état and Pinochet’s dictatorship in Chile have been tried in court. And due to its failure to settle accounts and deal with its own history, Guzmán regards Chile as a place steeped in amnesia. “Memory is vital, not academic. The discourse of women’s rights, gay rights, indigenous people’s rights have all become possible due to memory. People with memory fare better in education. As I see it, memory is as concrete as housing.”

The Greek audience and the young filmmakers are eager to learn from Guzmán’s experience as a filmmaker in the midst of the events culminating with the coup d’état in Chile. They are looking for tools to handle their current situation as citizens and as filmmakers.
Guzmán generously shares his experience from the making of Battle of Chile: “When people go out into the street, filmmakers need to do the same and make direct cinema. In Chile in ‘73 it was like a tennis match between government and trade unions (supported by U.S. officials), the action I was facing was amazing. But what you need to do is leave some space for the viewer to perceive things for themselves. Documentaries are first and foremost a space for contemplation. I made this film as a tribute, I was not objective, but I also gave my voice to the other side. That is what gives it a dialectic style. Documentaries have never been objective, the more subjective the better. An objective documentary is empty, like a camera filming a bank.” 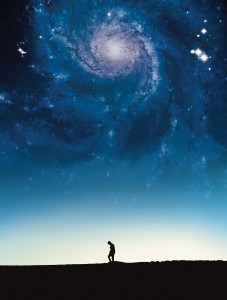 Nostalgia for the Light, Patricio Guzmán, 2010
Courtesy of Icarus Films

When a young student in the audience refers to the fact that although many documentaries on the financial crisis are made, they don’t seem to provoke any action, and then goes on to ask whether we simply make documentaries to supply information or if he believes we can encourage people to act, Guzmán replies:
“I think you’re right, we need to make documentaries, and they can certainly improve life and help solve concrete problems on water etc. But if they are poorly made, if they are boring, if they lack dramatics, they won’t work. Good intentions are not enough, you need to create characters, heroes, drama, emotions; simply showing mass graves to your audience will result in you losing them. You need to start with the universe, with the galaxy, in order to start talking about the victims of Pinochet.”

And this is exactly what he does in Nostalgia for the light, where the vastness of the Atacama Desert, where relatives of Pinochet’s victims search for the remains of their loved ones is linked with the universal search for knowledge in the astronomical observatories located in the same desert. Thus physical place, traces, memory and the frail individual are linked with the infinite universe. The sand of the desert, the human remains and atomic dust are connected in beautiful silhouette imagery filled with longing and a sense of loss. Loss through the remains swept away by the desert, loss of memory, and at the same time a sense of belonging.

You need to start with the universe, with the galaxy in order to start talking about the victims of Pinochet.

Guzmán himself has expressed how longing for him is a very productive starting point for imagination and creativity, and works such as In the Name of God, 1987, and Madrid, 2002, are also highly invested with a sense of longing.

So despite – or maybe because of – Guzmán’s strong dedication to tearing down the walls in, what he has referred to as ‘the museum of amnesia,’ poetry is key: “Documentary filmmaking is primarily poetic and teaching through documentary happens indirectly.”_

Patricio Guzmán Lozanes (born August 11, 1941) is a Chilean documentary film director. Guzmán also teaches documentary film classes in Europe and Latin America, and is the founder and director of the International Documentary Festival of Santiago (FIDOCS). He currently lives in France.

In your opinion, what is the role of documentary?
Documentary filmmaking is almost always a method to counter information. It says things traditional media do not. It speaks in a clearer tone of the problem citizens have. At the same time, documentaries have an artistic side, it is a form of poetry and it seldom uses metaphors, allegories, it all depends on the subject. Documentaries are means for communication as well as expressions of cinematographic art.

In The Battle of Chile: How did you manage to turn live events into a coherent, fascinating narrative without losing the immediacy of those events?
The most interesting thing about The Battle of Chile (besides the fact of having filmed it) is to articulate the true “history”. After having done a detailed written chronology of everything that happened, we discarded all the secondary events so that we could focus on the centre of the history during editing. But this selection had already been done during shooting as it was carried out with great selectivity, and above all taking advantage of the opponents’ fight going on in reality. The film “script” was a graph that occupied half a wall and that we elaborated before shooting. If we would have shoot without a much defined perspective, we would have ended the film in three months (the row stock).

It seems traces of memory and physical traces are closelylinked in your filmmaking – can you say a bit about the importanceof traces and fragments in your storytelling?
There is a type of documental archaeology. When we are presented with a territory, a city, a village, one begins to find the “prints” of memory everywhere: in the walls, in the old calendars hanging from the walls, in the way the steps in a stairway have been worn down, in the river banks.

In Nostalgia for the Light and other works, both you and the victims of Pinochet are quite literally on a mission to excavate history – can you talk a bit about your cinematic approach to this search for traces of history?
In Nostalgia for the Light I wished to make a film about the matter of the body and the matter of the universe. This is why I looked for a place where everything there was [in the] historic past, like the desert of Atacama; later I looked for astronomical observatories, and finally the human bones.

Can you say a few words about the obligations of a documentaryfilmmaker when dealing with the material of memory?
No artistic work can be done under the responsibility of “duty”. No poetry can be constructed mandatorily. I film a few things because I like them, and others because I feel indignity. I do it out of passion, not duty.