Alan Berliner is a master of creative documentary and experimental film. Özge Calafato met him in the midst of the Turkish uprising, which shocked him and made him challenge his role as a filmmaker.

Alan Berliner was in Istanbul this June as a guest of honour at Istanbul’s Documentarist, to present an extensive retrospective and give a master class. His trip coincided with the early days of the Gezi Park protests when Turkish police carried out a harsh crackdown against demonstrators, with excessive use of pepper gas, water cannon and plastic bullets. Suffering from breathing difficulties as a result of being gassed from a very close range, Berliner bore first-hand witness to the Gezi clashes, which he calls one of the most profound and enlightening experiences of his life. Inevitably, our interview would be marked by the state of affairs of this very historical moment for Turkey.

“I had never been in a position where I had to run for my life before. I‘d never been in such direct confrontation with the power of the state. And to be honest, I’d never experienced the kind of collective solidarity and power that came from the sights, sounds and energy of thousands upon thousands of people so intensely unified.” Berliner says.

“For someone like me, who has spent decades making films about his family, his name, his insomnia and other intimate aspects of his personal life, experiencing the gravity of the situation in Istanbul – how the citizens of a city, of a country, of a society, felt the urgency to confront and challenge the very essence of their social contract- had to challenge the way I understand my role as a filmmaker. Suddenly the particular motivations and aspirations that have always guided me didn’t appear to matter anymore. I was magnetized by the urgency of the Turkish people, and tear gas had now become a metaphor: ‘We either express ourselves or we suffocate.’ It unsettled many of the basic assumptions I had about the role of art in society, and I left Istanbul quite shaken.”

Explaining the transformation in his thinking, Berliner starts with the basic principles he works with:

“In order for my films to work, the screen must somehow function as both a window and a mirror,” he says.

“First, as windows to the lives and experiences of other people, just as they do in most films, whether fiction or documentary. The audience brings their curiosity, their interest, and their thirst to experience the stories of people, places and circumstances outside of their own particular worlds. At the same time, the screen must also become a mirror for the viewer, a surface on which they might also see something of themselves; an opportunity to reflect upon their own stories, their own family dynamics, their own names, their own sleep, or whatever it is that my film is exploring at that moment. For my films to succeed, the audience must be able to see the screen as both window and mirror – sometimes intermittently, or if I’m lucky, sometimes simultaneously. This is how I’ve always understood my work… But given the situation in Istanbul during my visit, I began to move beyond the simplicity of windows and mirrors and was confronted with the power of the frame – that is, the social and cultural milieu (or context) within which the film is seen – the surround. This was a transformative insight for me. It became impossible for me to speak about my work on it’s own terms anymore while I was in Istanbul. I found myself witnessing a moment in Turkish history where people were willing to risk their lives for the freedom to express themselves – something I’ve always taken for granted as an American citizen. I was so magnetized by the situation that I stopped thinking about the reasons for my visit, and wanted to go outside and join the protest. The truth is I went to Istanbul to give a master class and it was I who learned the most!

From Intimate Stranger, about his deceased grandfather, to Nobody’s Business about his father, to The Sweetest Sound, which explore his own name, Berliner’s fascinating work deals largely with identity, memory and the human condition, inspired by stories from his life and his family.

“In 1980 I made a short experimental collage film called City Edition, which has a surreal montage section near the end that includes an archival image of a family of four sitting at a kitchen table. Juxtaposed between images of a dolphin jumping out of the water, and a shot of Thomas Edison in his laboratory, I had the freedom to choose any image I wanted to help shape a montage that ultimately becomes a dream sequence. I often ask myself, “Why did I use the shot of the family?” Looking back now, I see it as a very pure but unconscious gesture in which I planted a seed to somehow remind myself that I would one day need to deal with the painful impact of my parent’s divorce, which had a profound effect on me.”

Alan Berliner knew that he would one day find an outlet for expression and mediation. And in 1981, when he serendipitously found a very large collection of rare 16 mm American home movies from the 1920s through the 1950s, he seized the opportunity to dig deeper and made The Family Album (1986). 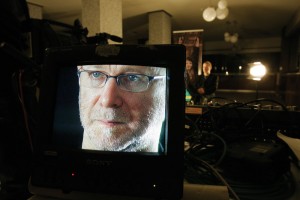 “When I began showing The Family Album at film festivals, I remember answering questions from audiences and journalists as if I was some kind of an expert on “the family.” But since the home movie footage and most of the soundtrack in the film was completely anonymous, I didn’t feel very comfortable in that role. And so it didn’t take me very long to realize that you can’t be an expert on “the family,” unless you’re an expert on your own family.”

The desire to explore his own family manifested itself in Intimate Stranger (1991), which he decided to make in 1989, using the collected letters, documents and family photographs saved by his maternal grandfather, Joseph Cassuto, a Palestinian Jew raised and educated in Egypt, who worked for the first Japanese company to do business in Egypt.

“My grandfather had been in the middle of writing his autobiography when he died fifteen years earlier in 1974. Searching in the back of my uncle’s office, I found 15 dusty and moldy boxes containing his papers that had been packed up upon his death, and decided to open them with an anthropologist’s sense of mission and an archaeologist’s patient care. I wanted to try and understand not only who my grandfather was, but who he thought he was, and why he felt it was so important for the world to know his life story – especially when his own children didn’t think it was all that interesting!”

Structured to the rhythms of a typewriter, this was not only a chance for Berliner to learn about his maternal family history, but also a chance to move though the transition from avant-garde filmmaking strategies to developing a personal storytelling style that was moving closer to documentary.

In 1996, Berliner made Nobody’s Business, reflecting his desire to further explore his family and his complex relationship with his reclusive father. “Between Family Album, Intimate Stranger and Nobody’s Business, I wanted to make people think more deeply about their families and their own family relationships. I was asking myself questions like, ‘What is the nature of the family contract that binds us to one another? What are our obligations to one another? What does it mean to be a father, a son, a cousin? What is a family legacy and should we embrace them or escape them?’”

In the following decade, with The Sweetest Sound (2001) and Wide Awake (2006), an essay on his life-long obsession with insomnia, Berliner shifted his focus inwards, looking more deeply and passionately at himself in order to explore the essence of being human and the complex issues of personal identity. Along with Berliner’s exceptional storytelling, his meticulous editing is often praised as one of the biggest forces behind his ability to create powerful universal messages to which we can all relate. For Berliner, who directed, produced and edited most of his films, editing is also “a process of discovery and invention.”

“When I’m working on a film, I don’t make distinctions between roles like producer, director, or editor. I’m simply a filmmaker. I do what I need to do to make the film as strong as it can be. I let the film tell me how it wants to be made. I try to find the pulse of the film, to feed it, nurture it and then watch it grow. In the end the film is the boss and I’m at its service, surrendering to the process of its creation and evolution,” he says.

Berliner claims that his latest film, First Cousin Once Removed (2012), a portrait of his friend, mentor and cousin, Edwin Honig, a poet in his last days, struggling with Alzheimer’s disease, was “the scariest and the most difficult film” he’s ever made.

“I think it’s a combination of everything I’ve ever done.
It borrows a little bit of something from each of my earlier films, and might be the closest I will ever get to understanding human frailty and the poignancy of the human condition. There’s a raw honesty to it that’s quite unsettling.”

A ground breaking filmmaker and media artist with incredible warmth and energy, Alan Berliner has given us new inspiration to revisit the ways in which we look at ourselves and the reality around us, and has convinced us once more of the universality of human nature.

Asked about his plans following First Cousin Once Removed, he doesn’t know what’s next: “I always come upon my next project as a delicate negotiation between fascination and need. When I’m in between films, I want life to throw me around a little bit, to shake me up, to change the way I look at the world. Kind of like what happened in Istanbul!”

To borrow Berliner’s word,: “it’s never supposed to be easy.” _

Let go of all of your preconceptions, stop rushing and be willingto commit yourself to filmmaking as a process.
It’s okay to make mistakes, to get lost along the way, and to have bad ideas.

Each film is a journey. You start out at some point, and if you’re lucky you end up in a place you never imagined.

The basic description of your film should be like a “Trojan horse”
Simple on the outside, and yet filled with a cauldron of issues, related subjects, intriguing subtexts and resonant implications that unfold as the film progresses.

“The truth is I went to Istanbul to give a master class and it was I who learned the most!”

“I think all works of art reflect the dance between revealing and hiding. I feel that I’m creating the film as if the characters I’m portraying don’t belong to me; they belong to the viewers. I’m trying to translate the specificity and detail of each story I tell into a universal language and a set of cinematic metaphors that people can take home with them. I’m not making films out of sentimentality or revenge, to get even with anyone or to prove a point.

I’m simply interested in what it means to be human.”