At Visions du Réel this year, the disorientating and highly sensory film Les Tourmentes won a well deserved special mention. DOX sat down for a talk on getting lost with the film’s director Pierre-Yves Vanderweerd.

Les Tourmentes is a special kind of storm, a storm in which many get lost and never return. The film creates a poetic space in a French desert haunted both by storms, the past, and lost souls. It’s very rare to see a film that allows itself to let the senses and poetry be the guiding principles instead of a traditional narrative structure. These are much more disorientating guides, but the film isn’t just a film of the lost ones. It’s a film that leads the viewer astray and let’s us get lost, as well. We are also lost in the storm.

The readings from the guiding principles for shepherds of Lozère on how to call back or commemorate the people who got lost in the storms run throughout the film. They explain how these storms rip away the veil between the past and the present. The space is haunted in many ways and on many levels. Through the storm a shepherd leads her herd, mental patients commemorate the dead mental patients in a graveyard, a man rings the bell that calls the lost souls back to the village. Nothing is explained. But the rituals, the cultural marks in the desert, the guide for shepherds and the long walk all lead us through a drama, where the opposing forces of sanity and insanity, nature and culture, past and present become muddled as our senses are drowned in the sounds and the wildness of the imagery.

Previously Vanderweerd has made films in the Sahara Desert, but this time he found a desert in his backyard. He is interested in the space where man and nature become interdependent, where their paths and destinies are intertwined. 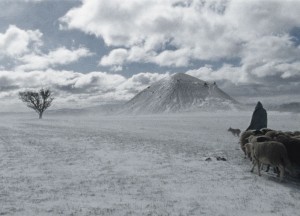 How did the film begin – with the storm, the sheep or the melancholia?
I actually live in the screening location, and I own the flock of sheep. Most of my films have been shot in the Sahara. But Lozère is also a desert. It’s the least populated area in France, and it has a strong relationship to nature.

The winter is central to the people of Lozère. It stretches from October to end of May, and is both a source of fear and attraction. Les tourmentes  is a natural phenomenon. They are snow storms where people get blinded, get lost, and end up going around in circles. For centuries people have gotten lost in the storm. There are bell towers where the bell is rung to draw people back to the villages – they are called “the lost”. The sheep also wear bells, and you send them out, so the lost people can come towards the flock. As a filmmaker, this strikes me as very poetic.

In the film, there is a voice-over that seems to lead the shepherd in the film. Where did the text of guiding principles for shepherds come from?
The practice of calling back the lost ones doesn’t exist anymore. But there are still shepherds, who know the old practices. So I collected their knowledge and wrote them down in the old regional language Occitan, that isn’t spoken anymore. The texts are recommendations for a shepherd on how to send out the flock, call back the lost and commemorate them by making a sacrifice. The practice doesn’t exist anymore, but I wanted to find a way to be there. I didn’t want to be a witness, but to live it in a sense. I wanted to evoke the feeling.

So over three years I built the flock, and had special bells made, bells that carry the sound far, with the idea of bringing people back from the storm in the present, but also the lost people in a more general sense.

What is the meaning of “les tourmentes”?
It means storms, but also refers to the melancholia that hits the people of the area because of the long winters. Many of the people I met in the psychiatric ward were affected by melancholia. I didn’t want them to explain anything, but just to feel their melancholia through their gestures and gaze.

Three thousand people, all mental patients, were buried in St Alban. And I would go with the patients from the psychiatric ward to the graveyard to visit them. The patients themselves said:  ‘We should go and send more love and comfort for them, and we should find their names.’ So we found old journals with all 3000 names and their medical histories. And this is how the reading of their names became part of the film.

The voiceover is a current psychiatrist. But the patients also said that ‘WE should say their names.’ So they also say the names, sometimes in whispers, sometimes as if they are calling them back. The whole film was created from sheepherding, and the ritual of calling back the lost ones, physically lost and mentally lost – and bringing them back.

You use a form that’s intrinsically intertwined with the theme of the film. The viewer gets lost with the lost ones. We are overwhelmed by the noise, the snow, and wind. The voiceover tells us that the storm rips the veil between past and present, but maybe also between reason and insanity?
Yes, I’m very interested in the border between reason and lack of reason. None of my works is about analysing, but allowing certain forms to emerge, allowing both the public and the filmmaker to get lost at any time. For this reason, there is no linear approach. I hold poetic relations dear. I want each spectator to make his own journey to the point where it is uncomfortable. I want to allow for different journeys. Part of getting lost refers to time; the past resurfaces. It’s about the emotions that inhabit the spectator. We live in a world where we expect linearity, but it’s important to get lost, to let instinct take over, to let go. This is a more circular form of experience. And this tourmentes, this melancholia, this form of torment brings us in contact with our own torments.

Your film contains many marks from the past, the graveyard, the megaliths etc. What does physical memory mean to you?
I’m very interested in what elements stay when time passes. Place names, for instance, are that mark. They evoke both collective and individual memories. I wanted to make a spectral film that plays with the borderline between the physical and the mental, and I also wanted to slow down the passing of time. Preserve the past, so to speak, through evocation, through the calling back and through remembering.

The soundscape plays a significant role in the film, and the sense of getting lost in the storm. How did you work with sound?
The whole film is shot on 16 mm without sound, so the sound is made separately. The sound works to create a sense of un-temporality. We re-recorded sounds of nature and layered them: the rubbing of stones is layered with the sound of fire, so the sound itself becomes timeless, and impossible to determine specifically. The sounds come from a human interiority, from the energy of earth, and the sounds from the past come back to us now.

Why did you choose this place, and why now?
I feel after having explored the territories in Sahara, I have found a collective imaginary space there. With Lozère I found it at home – a similar collective imagination, dominated by nature. Man doesn’t dominate nature. And this is a space where there is a presence that is invisible, and the imaginable is tangible.