Digital Domain at SXSW is dedicated solely to new forms of interactive storytelling on film.Suvi Andrea Helminen, an interactive filmmaker herself, looks at the challenges of this relatively new storytelling form.

Austin, the hip capital of Texas. A cluster of skyscrapers marks the city center and from there it spreads out on a lower level and gradually merges with the suburbs: houses painted in various bright colors, alternative garden décor, trailers. Once a year Austin transforms into a Mecca for creative individuals from the film, game and music industry for an intense week of screenings, showcases, events and panels during the South By Southwest Festival, popularly known as SXSW. More than a hundred thousand people are attending the festival.

One section of the festival program called ‘Digital Domain’ is dedicated solely to new forms of interactive storytelling in films. From a documentary perspective the interactive genre is still pretty young, and the creative boundaries are open to whoever wants to take the challenge. Various forms of digital documentaries are presented:  branched narratives, co-created works, data visualizations, works created to provoke activism, video archives, augmented reality experiences. Two of the people presenting are Caspar Sonnen, curator of IDFA DocLab and Michel Reilhac, interactive developer, previously Executive Director of Arte France Cinéma, two men with an extensive overview of what has been going on for the last decade. We meet for a chat about where we are now, and where we are going in the future with interactive documentaries.

To begin with, I ask them to summarize the stage they think the industry is at with interactive storytelling. Sonnen opens the discussion by drawing a parallel to film history:

“I see a lot of things in interactive documentary that we saw before in the days when artists like Dziga Vertov were exploring what cinema could be. For instance, I see many projects about a specific place with many different characters and fragmented little stories. In those projects, like for instance Highrise or Gaza/Sderot, the open concept of a place becomes the main character – not one single protagonist as we usually see in traditional television documentary drama. In such projects I see a direct link back to City Symphonies like Vertov’s Man With A Movie Camera. You feel the joy of invention in films like that and I think you feel the same joy in some of the interactive projects we see right now.”

Reilhac agrees and continues down the historical track:
“We forget that when cinema was born it took a whole generation for directors to appear, who understood the specific language of cinema, for instance the treatment of time. It took over 20 years to understand that they didn’t need to show the whole trajectory of a character across a room, to understand that you could cut, and people could reconstruct what happens in between and to invent the time cut concept which we all take for granted in films now. It was a complete revolution, the invention of a completely new language. So the same thing needs to happen with transmedia, but in a way that we don’t know yet, because we are just beginners.”

Sonnen has seen an enormous growth within the interactive documentary field in the last five years. Even though we are beginners he thinks that some of the existing projects could already outlive their time. He mentions the early French webdoc Thanatorama as a candidate:
“50 years from now people will still watch it, because it is a timeless piece about death. Maybe they will say: ‘Ha ha, look how people were buried 50 years ago, when we still had space’, but it’s a perfect example of an interactive narrative which is very cinematic and that uses interaction to create a uniquely personal experience.” 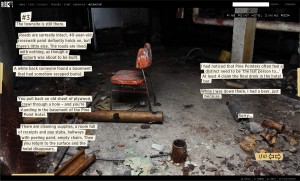 Welcome to the Pine Point, Michael Simons and Paul Shoebridge, 2011. Courtesy of National Film Board of Canada

After this thread of film history analogies, I remark that at the same time we’re forgetting that we have more than 40 years of narrative game design experience to draw from, and most filmmakers are trying to invent an interactive storytelling language from scratch. Sonnen responds:
“Good point. The mainstream game and film industry have evolved fairly separate from each other, but the internet and connected screens are rapidly bringing the two worlds together. That said, the most interesting things still seem to happen where the indie game world meets documentary and visual art.”

Linear narrative is in our DNA as human beings
Caspar Sonnen

Moving on to the question of participation, I ask how to engage an audience in a genre which is still a pretty new niche. How do we transform an audience from passive and reflective, to actively engaged?

Sonnen sees it as one of the major challenges that interactive creators have to deal with:

“Linear narrative is in our DNA as human beings, it’s what makes us human. I am currently witnessing how my three-year-old daughter is going through a phase in which she constantly invents weird little stories using the people and objects around her. Parents don’t have to teach kids to tell stories; it’s a basic part of human development. Narrative is how we make sense of the world – and that is why we all love to consume linear TV and cinema so much. It’s also why creating an interactive narrative is one of the hardest things to do well. Audiences are not used to or looking for these types of experiences.”

Reilhac defines what he thinks is the main difference from linear stories:  “The main difference to me in interactive storytelling is that there is a physical engagement, and having to actually do something. To use either your finger or your body to do something and that’s a big step:  to change the nature of the engagement. It never happens by itself. The intention and motivation of the author have to be really clear because it will directly impact how you design the touch point between the story and the change in the audience’s behavior, to the point where the audience will be ready to take that first leap of faith. It’s like stepping on to a dance floor and starting to dance. Some people wait until 3 o’ clock in the morning when they are completely drunk, and they have wanted to go dance all night, but they didn’t have the guts to do it, because they didn’t want to look like fools. It is the same thing. For people to take a step into the arena of active participation in a story is very difficult.”

I ask them to tell me about their current favorite interactive documentary work. Reilhac starts: “The one that I’m really touched by is Welcome to Pine Point about the ephemeral quality of one’s life. It had incredible poetic dimensions that I really connected with.”

Sonnen compares two of his favorite interactive documentaries that were presented at last year’s IDFA DocLab:  Alma, a tale of Violence and Bear 71 produced with funding from two of the main players in the field, ARTE and NFB. Alma, a Tale of Violence is about a woman telling the story of her past as a member of a brutal gang in Guatemala. During the film you can scroll up and down between two screens. Bear 71 follows the life story of a grizzly bear in Banff National Park in Canada and shows the clash between our world and the natural world. The viewer can navigate around on a map and switch freely between surveillance cameras in the park, but at the same time follow a structured linear narrative – the story of Bear 71

“It’s interesting to compare them. Both projects moved me in a much more emotional way than interactive projects usually do. Alma presents us with a very condensed form of interaction. As a viewer, all you can do is use your finger to move between two screens. Some people say it’s so simple, is that really still interaction? Where Alma is simplified to the core of interaction, Bear 71 gives you much more open space with all the risks that follow. That you can feel lost or overwhelmed. However, for me, when I started exploring Bear 71, the story and all the fragmented videos and pictures on the map quickly became one. When it happens, this narrative serendipity effect is very powerful. When I stumbled upon the webcam area, I was really moved. I saw the tenderness of some lady, somewhere in the world, who I couldn’t speak to or interact with.  Suddenly you understand this story is not ‘just’ about a bear, but about all of us.”

Our conversation ended here, so we managed to talk about the past and the present, but we didn’t get to the future.

The next day I hear an interesting perspective during the panel presentation of my own interactive documentary 48 Hour Games, a multiple choice narrative about the creative process of making video games. During the Q&A, a guy in the audience makes the following remark: “What if in the future we could take this even further, so we no longer need a mouse to choose a path when the story branches out, but start making documentaries that just react to your eye movements?”

This comment could be a plausible prediction. Today most interactive films react to conscious choices with a mouse click or a finger swipe, but maybe one day we will no longer need this. We could create interactive experiences that react to your mere presence as an audience, where the interactions are no longer conscious and the user interfaces are natural. For example using biofeedback, where the film responds to bodily reactions from the viewer, which are picked up by measuring devices and fed into a computer: heart rate, brainwaves, eye tracking etc. The first technology to take this step is already here. In this scenario the audience will no longer have control or agency in the experience unless they choose to. They won’t even have to step onto the dance floor. The audience can lean back and watch and the film will respond to them anyway. Then again if that happens, maybe we won’t call it interactive storytelling any more. Maybe we will call it adaptive storytelling. _

• Augmented Reality (AR): an enhanced version of reality created by the use of technology to overlay digital information on an image of something being viewed through a device (such as a smartphone camera).

Links to the interactive docs mentioned