After yesterday’s opening session, Zagreb Dox really took off today (see picture), and it was a strong start. Former EDN director Leena Pasanen and former EDN Chairperson Stefano Tealdi kicked of their “training programme’ and as you can judge by the second picture, a lot of interested people are participating in it. In the afternoon Hans Robert Eisenhauer and myself, we were invited to talk about “How To Write About What Is Yet To Be Discovered?” The picture was taken during H.R.E’s talk (as you can also see by the serious faces…). I tried to take a picture while I was talking, but that would have been multitasking and that’s not my strong point. 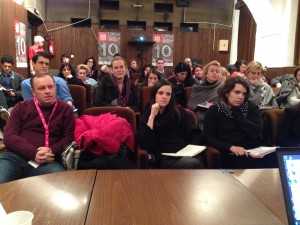 And then it was cinema time. I got myself three tickets and started a documentary marathon. Actually, I took a bad start. You might ask yourself why I decided to go and watch the documentary that was called: Moj Britanski Posao? Well – he explained with cheeks turning slightly red – because the English title is Sex: My British Job. And although I usually spend my free hours on reading Kant, Hegel and Wittgenstein, while listening to the somewhat more complicated works of John Cage, I have been known to be interested in subjects of a somewhat lighter nature too. Of course I should not say that the subject of hidden prostitution by Asian women in the UK is a matter to make fun of! Quite the contrary, actually. It’s a matter that deserves a good documentary and I’m very sorry to say that I was extremely disappointed in Nick Broomfield’s work. Where are the days that Channel 4 would surprise us with well made documentaries that mattered? Long gone, I fear.

But once I got over my disappointment (a stiff drink helped me there) I was in for a real treat, although the subject matter was no laughing stock either. In a grandiose work of real craftsmanship, director Richard Rowley introduces the viewer to the dark corners of America’s war on terror.  Based on a great script by David Riker and Jeremy Scahili, the documentary confronted me with a world of violence and illegal actions, sanctioned by the White House and most probably by the people we Europeans call our leaders. I think that if we would really understand what crimes are being committed in the name of “protecting us from terror” we would never have a good night’s sleep again.
If documentary wants to draw people to the cinema, this is how is should be made. Excellent voice-over, great photography, strong storytelling, powerful editing, a fascinating main character and a subject that is of importance to us all. And before I forget: a wonderful soundtrack with music played by the Kronos Quartet.

To end the evening, I spent a very nice time with Thomas Balmès Happiness. If I wouldn’t be too tired, I’d try a game of words and start playing with the director’s name to turn it into Balmas and then Balsam, for that is the effect that the film has on the soul: a much needed ointment to cure the pain caused by our cynical times. I can’t say this film is a masterpiece (I keep that word for films like Nati Baratz’ Unmistaken Child)but I had a really good time with the lovely boy from Buthan, watching him balance between the traditional life and the modern world. The documentary is made with lots of love and a very fine sense of humour. Actually, I sometimes had the feeling that I wandered in the boys’ head and felt the same amazement and yes, happiness, as he must have felt during his adventures. I can’t explain why, but some of the wide shots in which one can see the young boy play just made me happy. So the title is wellchosen and the film is certainly worth your while driving to a cinema near to you and watch it.

And what better way to end the evening, than by taking a quiet stroll to the hotel in the exquisite company of my old pal Tue Steen Müller, talking about the good old days (and wine and steak, of course). You know, I might still be under the influence of Happiness, but looking back at my long career in media-land, the most valuable thing I got out of it are the many friendships and the wonderful feeling that comes over me whenever I meet those friends, somewhere in the world. Whatever happens, they cannot take that away from me.

Still there? Well, in that case I have no option but to be on the rendez-vous again, tomorrow. Thanks for sticking with me.

» Exploring the sonic potential of documentaries

Somewhere between fiction, non-fiction and art