Today has been quite uneventful. I had earmarked the morning to catch up with some office work and to deal with some stuff from my former (producer-)life that I had to get out of the way. Much to my surprise I was glued to my computer until 5.00 p.m. It made me miss Marcel Lozinski’s Father and son on a journey.  I was unaware of the fact that both father Marcel (whom I had the pleasure to meet during Kolkata’s DocEdge event last year) and son Pavel (who was with us in Kolkata, this year) made their own version of the same story. I absolutely want to see both.

The only person who really profited from my imitation of Stakhanov (go to wikipedia, younger readers…) was the housekeeper who had such a look of despair on her face when she entered in the middle of the afternoon, that I felt compelled to tell her that it was not necessary to make the room. Well, now that I’m getting very personal, let me share the view she was confronted with (and which most probably will get worse over the next four days). 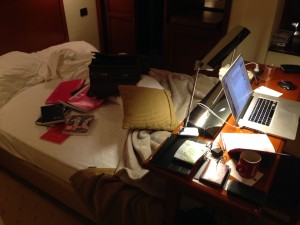 Once I escaped from my administrative duties, I found refuge in the hospitality section of the Festival, where godfather Nenad Puhovski keeps an eye on the events. Actually he behaves more like a father who wants everything to be perfect for his guests. I really like this space where in between films people can meet, sit down to relax and get an indigestion from the enormous amount of biscuits that is freely available. The volunteers will do about anything to make the visitors feel at home; great people.

Today I discovered that whenever I see a documentary in a cinema, it either hits me like a rock (in the positive or the negative sense; I love it or I hate it) and I have my opinion about it readily available, or I’m less struck by it, and then I need at least 24 hours before deciding what to think of it.

The two documentaries I screened today ended up in that category. Stories we tell by Sarah Polley certainly didn’t leave me indifferent. We meet lovely characters in a story that in my opinion is not so surprising (I have a rather cynical look on the vows of marriage) but the storytelling certainly is. I’m not giving away the gimmick – which means that I can’t say a lot about the film – but there are many issues related to the the film that I need to reflect on before forming my final opinion. But would I advise you to see the film? Absolutely.

The second documentary, Sacro Gra, Gianfranco Rossi’s impressionistic portrait of the (environment of the) ring-road that holds Rome in its claws, impressed me a lot, but it didn’t blew me off my feet. I would like to sit in on a masterclass to find out how this documentary came about and how the casting and the shoot was organised. To me, the film felt like a mixture of Jacques Tati, Fellini and Ettore Scola’s Brutti, Sporchi e Cattivi.And I mean that as a compliment. The main characters are shown with tenderness and love, and eccentric as they are, they constantly remind us of the fact that for many life is not easy and that we should never judge people by their appearance.

http://www.sacrogra.it/
Tomorrow will be a somewhat busier day. I’ll try to see some more films from the region (until now I concentrated on the international section) and I’ll have the pleasure to moderate a presentation about distribution. That’ll be fun. And before I forget, I should mention that Tue Steen-Müller and I are now turning into the fashion icons of Zagreb, wearing the famous orange shoes that were offered by Docsbarcelona. Maybe a career on the catwalks of Paris is waiting for us.

Thanks for reading me today and to quote the Gov’ of California: I’ll be back.

0
DominicDennis December 5, 2014
No Comments Yet